Evergreen Bible Baptist Church has had a long history. It began as Olive Leaf Christian Church in 1907. After a few years the church changed its name to Evergreen Christian Church. (There weren’t any olive trees in Kalkaska County anyway!) Families came to the services here either on foot or by horse and buggy. Preachers often had to ride circuits which meant they would come to the area for only a short time. On their arrival the church family took care of funerals and weddings. They would listen to the preacher’s sermons and then he would go to the next appointment.

As time passed the church grew and during the 1940’s a pastor named Peter Nieukoop came to lead our church and it became Evergreen Baptist Church. Under the leadership of Frank Brower, William Zelinko, Robert Wiltshire, and Ron Jackson the church began to thrive on the corner of Saunders Road and Anderson Road in Kalkaska Michigan.

In 1962 the old white framed church burned down. The congregation did not miss a service but met elsewhere until the new place of worship could be built. Later another building was erected to house Evergreen Baptist Academy. The academy lasted nearly 30 years before it closed its doors in 2006.

Over the years believers have come and gone, some to different parts of the country and some to their new home in Heaven. Evergreen Bible Baptist Church is a wonderful group of believers who still believe in the old book, the precious blood and the blessed hope. 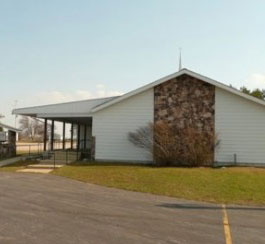 Evergreen Bible Baptist Church is a wonderful group of believers who still believe in the old book, the precious blood and the blessed hope.

Pastor William Kuiper graduated from Midwestern Baptist College of Pontiac Michigan in 1980. After leading a church in Luther Michigan and Jackson Kentucky, the Lord brought him and his family to Kalkaska Michigan to take this church.

Pastor Kuiper married Rachel Vance, his high school sweetheart in 1977. Together they had three boys who are grown and raising their own families. Since 1996, they have led Evergreen and have enjoyed the ministry here. 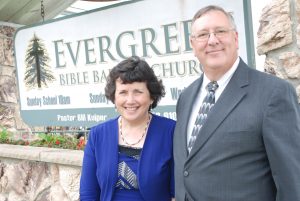 Our purpose as stated in our constitution and by-laws: Evergreen Bible Baptist Church’s purpose is evangelizing of the unsaved by the proclamation of the gospel of the Lord Jesus Christ, the education of believers in a manner consistent with the requirements of the Holy Scripture, and the maintaining of missionary activities in the United States and in foreign countries.

A normal morning service begins with singing. We still use the old hymns and hymnbooks. Our singing is lively and uplifting. We have a 4 part choir which with the help of a director and musicians bless the congregation. The preaching part of the service rarely last over a half an hour. We use the King James Version of the Bible. The current pastor’s style is expository and closes with an invitation to the Lost to be saved and believers to follow the Lord Jesus more closely.